Why Do Cats Bunny Kick? While cat behavior seems like it’s a mystery, there can be reasons for their wild and weird activities! We wanted to learn about the (adorable) bunny-like behavior cats often exhibit with new cat toys: bunny kicking, and why cats bunny kick in the first place. Is bunny kicking an act of playfulness or a sign of aggression? Let’s hop to it and find out!

So… what is bunny kicking?

For those who aren’t familiar with the term “bunny kicking”, it’s when cats lay on their backs or sides, grab onto a toy, and begin kicking at it with her rear legs. Like this: 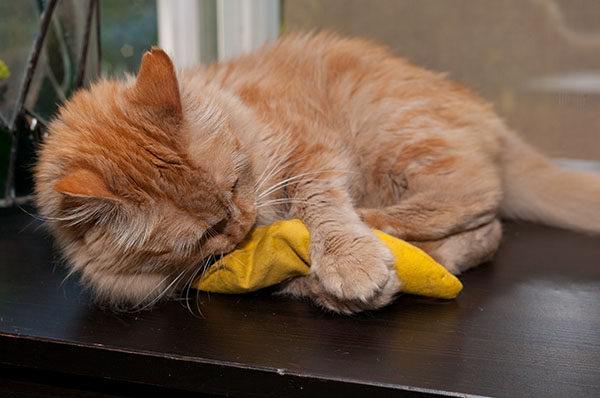 When cats bunny kick, it can be playful!

Many healthy cats enjoy the act of “play wrestling” with other familiar cats, toys, pets, or – yep, their humans. So, when a cat grabs their toys or your hand (ouch!) and starts to bunny kick, they’re likely playing rather than violently attacking.

We want to stress, however, that cat parents should avoid letting cats bunny kick their hands, arms, feet, or legs. Though cats may not mean to harm you, their playful kicks can leave behind painful scratches. When a cat begins to intensely play with your limbs, try guiding them to wrestle a cat toy, instead!

Bunny kicking can also be aggressive…

Cats also use their hind feet to kick their adversaries when fighting one another, so sometimes that bunny kick is for fight’s sake. By lying on their backs or sides, cats can use all four sets of claws and teeth at the same time to fight. This strategy optimizes the amount of damage a cat can inflict on their opponent.

How can you tell when bunny kicking is playful or aggressive?

It’s all in the body language. If a cat’s ears are back, eyes are dilated, and tail is swishing jerkily, then they may feel agitated. In this scenario, we recommend refraining from engaging the cat until their nerves calm down.

On the other hand, if a cat’s ears are forward and face muscles are relaxed, they’re probably just being their super playful selves!

This article was provided by KitNipBox, a subscription box service for your very special kitten or cat. Find out more at KitNipBox.com.